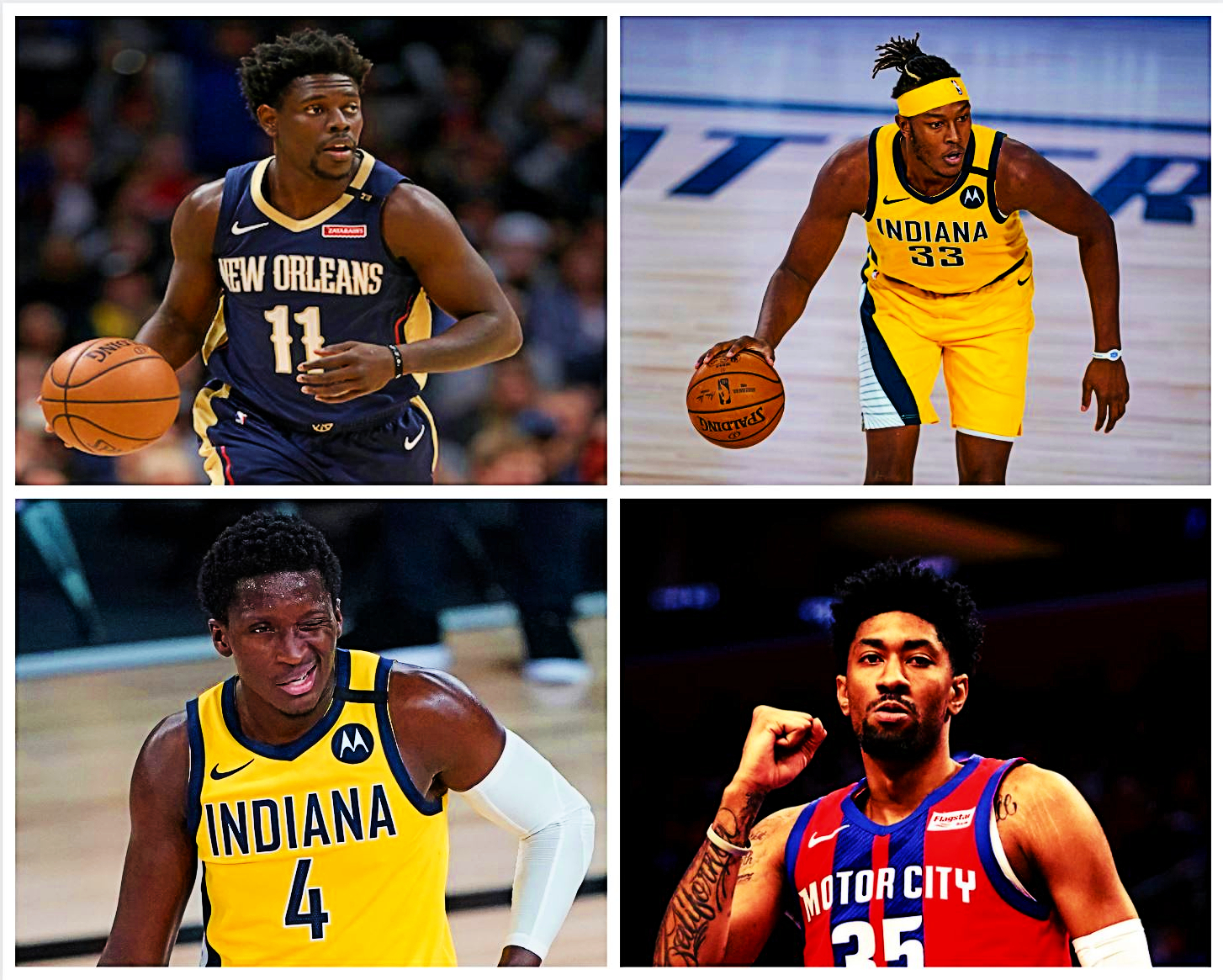 While we discussed the Top 4 Moves Lakers Could Realistically Pull Off to Repeat as NBA Champions in our last article, we can’t ignore the possibility the Lakers will be able to pull off a blockbuster trade for a third superstar.

While pundits constantly remind us the Lakers gave up most of their trading chips in their mega deal for Anthony Davis, winning a championship may have elevated the value of several of the remaining players on their roster. Championship resumes for young players like Kentavious Caldwell-Pope, Alex Caruso, and Talen Horton-Tucker and expiring contracts of proven vets like Danny Green, Avery Bradley, or JaVale McGee may be worth more.

The economic landscape in the NBA has also changed dramatically due to the coronavirus pandemic, with the shortened 2021 season being sacrificed as teams and players make moves hoping to setup a normal 2022 season. Suddenly, there are rumors of big name players like Jrue Holiday, Chris Paul, Gordon Hayward, Victor Oladipo, Bradley Beal, Devin Booker, James Harden, and Giannis Antetokounmpo possibly being on the move.

With that in mind, here are the top four moves, with the help of the basketball gods, savvy negotiations, and competitors focusing elsewhere, the Lakers just might magically pull off to repeat as NBA champions:

The top magical move the Lakers could make to improve their chances of repeating as NBA champions would be to trade with the New Orleans Pelicans for 30-year old, 6′ 3,” 205 lb All-Star point guard Jrue Holiday.

Since Holiday will make $26.2 million next season, the Lakers will have to send out $20.1 million in salaries for the trade to be legal. The problem for the Lakers will not be matching salaries but making a good enough offer. Holiday will be one of the top trade targets on the market and the competition for him will be intense so the Lakers need to put together their best offer to have any chance at landing the Pelicans’ elite point guard.

The competitors may include the Brooklyn Nets who may offer Caris LeVert, the Golden State Warriors who may offer Andrew Wiggins and the 2nd pick in the 2020 draft, and the Boston Celtics who may offer Gordon Hayward. But there are so many elite players on the market the Lakers could get lucky as there’s a good chance the short offseason NBA free agency period could turn into a form of musical chairs where Jrue Holiday falls to the Lakers.

Since Holiday would be a perfect fit alongside LeBron and AD, the Lakers should go all in with an offer that includes Kyle Kuzma, Alex Caruso, Kentavious Caldwell-Pope ($15M S&T), and their 2020 first round pick. That would give the Lakers a third superstar to go with LeBron and AD and the ability to bring back Rondo, Morris, and Howard to go with Green, Bradley, Horton-Tucker, McGee, and whomever they sign with their MLE.

Holiday would give the Lakers the third superstar, reliable third scorer, and elite second playmaker to defend their championship as well as a two time All-Defensive player with solid experience playing with AD and Rondo.

While trading for Holiday would transform the Lakers, pulling off a mega trade for 24-year old, 6′ 11,” 250 lb Indiana Pacers’ center Myles Turner could have just as great an impact on the Lakers’ championship window.

Like Holiday, Turner has attracted great interest and will be one of the most sought after trade targets this offseason as the Pacers look to retool their front court around players who better fit with rising star Domantas Sabonis. The Lakers’ major trade competition for Myles Turner will be many of the same teams and same offers they would need to beat to acquire Jrue Holiday: the Brooklyn Nets, Golden State Warriors, and Boston Celtics.

Because Turner is only making $18.0 million, the Lakers only have to offer $14.4 million for the trade to work. Like Holiday, however, the Lakers will need to make an offer that’s tempting enough to beat other teams’ offers. The Lakers need to go all-in if they expect the Pacers to trade Turner to them, making an offer similar to their offer for Holiday of Kyle Kuzma, Alex Caruso, Kentavious Caldwell-Pope ($15M S&T), and their first round pick.

While Jrue Holiday qualifies a true third superstar, Myles Turner does not. What he would bring to the Lakers starting lineup though could be just as impactful as he’s the ideal modern center to play alongside Anthony Davis. Turner allows Davis to play his preferred power forward position and has the skills as a center to transform the Lakers into a juggernaut at both ends with his elite 3-point shooting, rim protection, and perimeter defense.

The best analogy why the Lakers should trade for Myles Turner is he’s a mini clone of Anthony Davis and would enable the Lakers to play their version of ‘small ball’ for the entire game rather than just half of the game.

Because of risks due to his subpar play coming back from a quad injury, trading for 28-year old, 6′ 4,” 213 lb guard Victor Oladipo isn’t the slam dunk trading for either Jrue Holiday or Myles Turner would be.

But the payoff could be just as great if Victor recovers 100% to become the budding superstar he was two years ago when he was ranked one of the best shooting guards in league, making the All-NBA and All-Defensive teams. While Victor’s trade value is low right now because of concerns about his injury and the ability to re-sign him, there will still be competing teams looking to trade for him, including the Miami Heat and Milwaukee Bucks.

Since Victor makes $21.0 million, the Lakers need to include $16.8 million in salaries to make the trade work. The Lakers should offer the Pacers Kyle Kuzma, Danny Green, and their 2020 first round pick for Victor Oladipo. Considering there’s some risk due to the injury and his free agency status, the Lakers’ offer should be enough to convince the Pacers to accept the offer. From the Lakers’ perspective, there’s little risk of Victor not re-signing.

One of the most appealing aspects of trading for Victor is his potential as a legitimate third superstar who’s young enough to help LeBron James and Anthony Davis win now and then to co-star with AD once LeBron retires. Because the Lakers would receive Oladipo’s Bird rights in the trade, they would then be allowed to go over the cap to re-sign him to a max contract, which is the only sure way to add a third max player to their roster.

While trading for Oladipo is riskier than trading for Holiday or Turner, the upside is greater since he has the potential to be a genuine third superstar whereas Jrue and Myles were just perfect catalysts for LeBron and AD.

With Anthony Davis committing to re-signing with the Los Angeles Lakers, Christian Wood becomes the preeminent free agent big man this offseason, which means there’s a good chance there will be a bidding war to land him.

While some free agent pundits established Wood’s market value around $10 million per year, other analysts have suggested he could command as much as $15 to $17 million per year based on his breakout 2020 year with the Pistons. The maximum contract the Lakers should offer Christian Wood is a three-year $48 million deal starting at $16 million per year. Combined with a chance to win a championship, that should be an offer he just can’t refuse.

Assuming the Lakers can come to an agreement with Christian Wood on a contract, all that remains is working out an acceptable sign-and-trade deal the Detroit Pistons will accept as equitable compensation for trading him. The obvious centerpiece to the sign-and-trade deal is Lakers forward and Flint, Michigan native Kyle Kuzma, about whom the Lakers and Pistons had already had trade discussions before the trade deadline last winter.

A sign-and-trade between the Detroit Pistons and the Los Angeles Lakers of Christian Wood in return for a package of Kyle Kuzma, Danny Green, and JaVale McGee should be enough compensation to facilitate the deal. The Lakers get a player who could transform their team and clear cap space to give raises to AD, KCP, and Rondo and use their MLE and BAE to further upgrade their roster despite being limited by the $138.9 million hard cap.

Pairing 6′ 10″ Christian Wood and his 7′ 3″ wingspan with 6′ 10″ Anthony Davis and his 7′ 6″ wingspan would give the Lakers unprecedented size and length and a monster front court that would be a nightmare matchup.