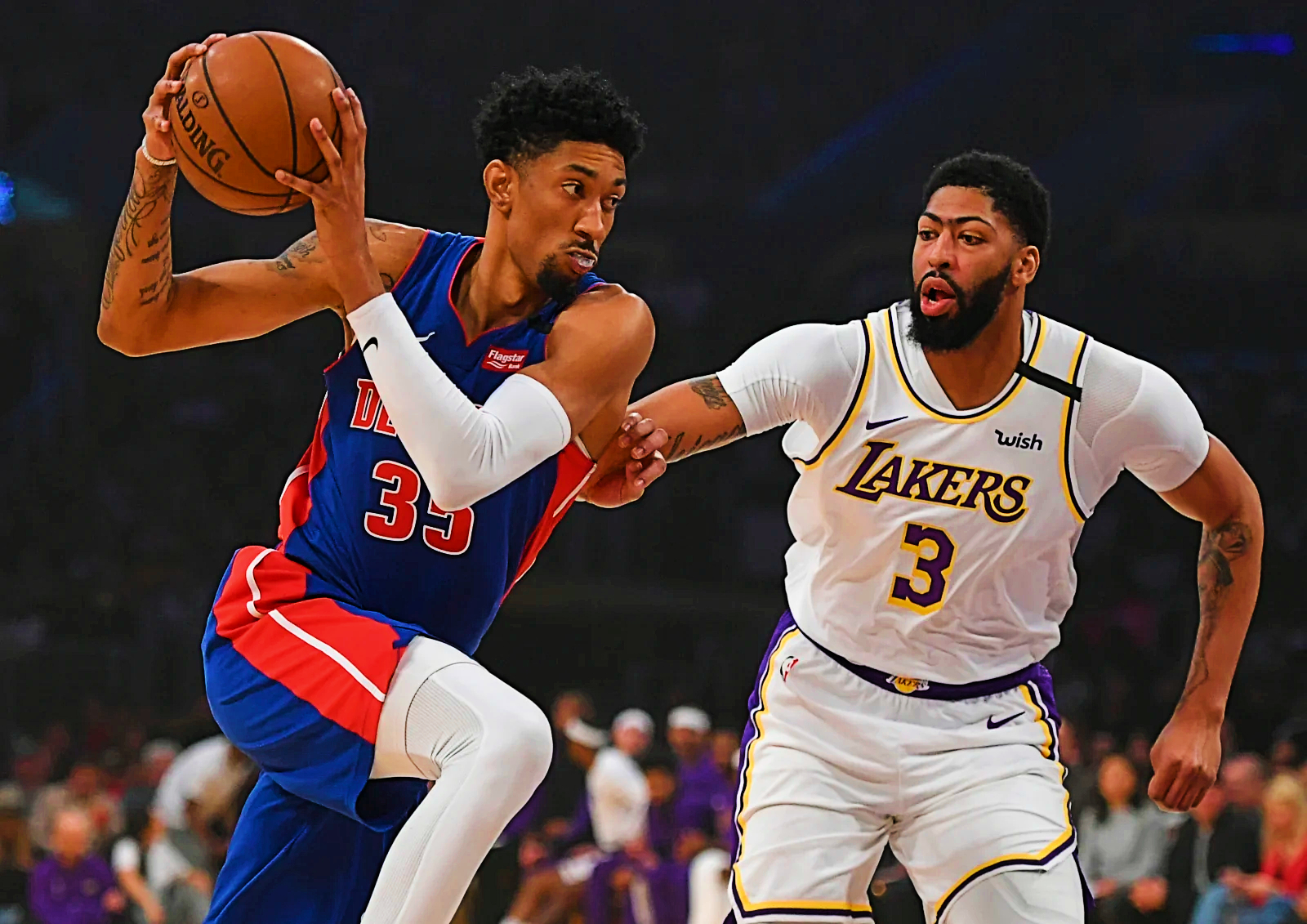 With Anthony Davis committing to re-signing with the Los Angeles Lakers, Christian Wood becomes the preeminent free agent big man this offseason, which means there’s a good chance there will be a bidding war to land him.

While some free agent pundits established Wood’s market value around $10 million per year, other analysts have suggested he could command as much as $15 to $17 million per year based on his breakout year with the Pistons. Right now, there are six NBA teams who currently have the cap space to make an offer that high for Christian Wood: the Atlanta Hawks, New York Knicks, Detroit Pistons, Charlotte Hornets, Miami Heat, and Phoenix Suns.

But other NBA teams could also make roster moves to create the cap space to add their names to the list and teams like the Lakers without cap space could expand the competition by proposing sign-and-trade offers for Wood. If the Lakers are serious about trading for Wood, the two big questions are who will be their competitors for him and what should be their ceiling in terms of dollars and assets offered when it comes to consummating a deal?

One thing that still haunts me is how Wood has the same unique skill set to play offense and defense at all three levels like Davis, which also makes him exactly the type of player teams need to match AD at both ends of the court. Davis’ ascension as a unicorn and the best big man in the game today has not gone unnoticed by the rest of the NBA. League GM’s now know the road to the NBA championship now runs through the Lakers and Anthony Davis.

We know the Celtics and Warriors have expressed interest in trading for the Pacers Myles Turner, whose another modern center who can protect the rim and defend in space on the perimeter. Perfect defender for Anthony Davis. Christian Wood falls into the same category and the Lakers should pursue him both to create a juggernaut team and prevent competitors from adding a player to counter the ultimate weapon they have in Anthony Davis.

Players like Christian Wood and Myles Turner are going to ignite an arms race between the elite teams looking for an answer for Anthony Davis and a way to derail what they fear will be another Lakers’ championship dynasty. The Lakers’ likely competition for Christian Wood is not going to come from the Hawks, Nicks, Pistons, and Suns; it’s going to come from teams looking for ways to pass the Lakers: the Heat, Clippers, Warriors, Celtics, and Bucks.

Unfortunately, that levels the playing field to acquire Wood more than if it were just a contest betweens teams offering only the MLE or money instead of an opportunity to win but the Lakers still have one significant advantage. They are the NBA Champions and Christian would be joining the team with the best two players in the world and a better opportunity to win a ring. The only question is how much would the Lakers be willing to pay to sign him?

Besides first year salary, the Lakers need to offer Wood a three-year deal so they will have his Bird rights and be able to go over the cap to keep him once the contract expires, which means compromising their 2021 plans. Since the Lakers will still want to have the option to pursue a third superstar after next season, they need to make sure Wood and his contract are easily tradable if necessary to create cap space to sign that superstar in 2021.

The maximum contract the Lakers should offer Christian Wood is a three-year $45 million deal starting at $15 million per year. Combined with a chance to win a championship, that should be an offer he just can’t refuse. Other teams could offer a few million more but the chance to join the champs and play with LeBron and AD in L.A. should be irresistible for a 25-year old who played for 4 teams in 5 years with a top salary of $1.6 million.

Assuming the Lakers can come to an agreement with Christian Wood on a contract, all that remains is working out an acceptable sign-and-trade deal the Detroit Pistons will accept as equitable compensation for trading him. The obvious centerpiece to the sign-and-trade deal is Lakers forward and Flint, Michigan native Kyle Kuzma, about whom the Lakers and Pistons had already had trade discussions before the trade deadline last winter.

The Pistons are in a difficult position. They would love to re-sign Wood and have the cap space to do it but he has announced that he’s going to leave via Instagram and they don’t want to lose him in free agency for nothing. While they Pistons have over $30 million in cap space, Detroit is not a top destination for free agents, which makes using their cap space to take on salary in a sign-and-trade a resourceful strategy to acquire quality players.

With Wood having agreed to a contract with the Lakers eliminating other potential trade partners, the Pistons would still have leverage knowing the Lakers don’t have cap space and need Detroit to agree to a sign-and-trade. But an offer from the Lakers of Kyle Kuzma, Danny Green, JaVale McGee, Quinn Cook, and their 2020 first round pick should give the Pistons more than fair compensation for agreeing to sign-and-trade Christian Wood.

The drawback for the Lakers adding a player via a sign-and-trade deal is it would limit their total payroll costs for the 2021 season to a hard cap of $138.9 million, meaning the Lakers could not exceed that for any reason. Right now, the Lakers have committed $119.6 million to 11 players in 2021. Bradley and McGee are not expected to exercise their player options but Davis, Caldwell-Pope, and Rondo are expected to opt out looking for raises.

Assuming the Lakers re-sign AD to a 1+1 max contract for $32.7 million and give both KCP and Rondo raises to $12 and $6 million using their Bird and Early Bird rights, they would then have $130.3 million committed for 2021. That would leave they with just $8.6 million left to add 4 more players to their roster, making it impossible to use the full $9.6 million MLE and challenging to use the $3.6 million BAE or even sign their first round pick.

But a sign-and-trade of Kuzma, Green, McGee, and Cook’s $26.1 million for Wood’s $15 million would free up $11.1 million in cap space and give the Lakers $119.2 million in salaries for 2021, $19.7 million under the hard cap. That would enable the Lakers to pursue free agents like Dragic, Gallinari, Harkness, and Baynes with their MLE, re-sign Morris or Howard with their BAE, and add other minimum salary players like Cousins or Dudley.

A sign-and-trade between the Detroit Pistons and the Los Angeles Lakers of Christian Wood for Kyle Kuzma, Danny Green, JaVale McGee, Quinn Cook, and the 28th pick in the 2020 NBA draft should be a win-win for both teams. The Lakers get a player who could transform their team and clear cap space to give raises to AD, KCP, and Rondo and use their MLE and BAE to further upgrade their roster despite being limited by the $138.9 million hard cap.

Detroit avoids losing a player who could have left in free agency and, instead of nothing, receives four championship-tested players they could not have attracted in free agency plus a first round draft pick from a sign-and-trade. The Pistons get the home town star they wanted in Kuzma, two quality defenders who are great roster fits in Green and McGee, a deadeye shooter whose contract is only partially guaranteed in Cook, and a first round pick.

While deals proposed by bloggers never happen, the approach outlined is a perfect blueprint for how the Lakers can take advantage of a trade or sign-and-trade to acquire a high impact player while increasing their cap space. The Lakers will need to figure out how to navigate a hard cap to reward key contributors like KCP and Rondo, use their full non-taxpayer MLE or BAE to upgrade the roster, or go after an elite prospect via a sign-and-trade.