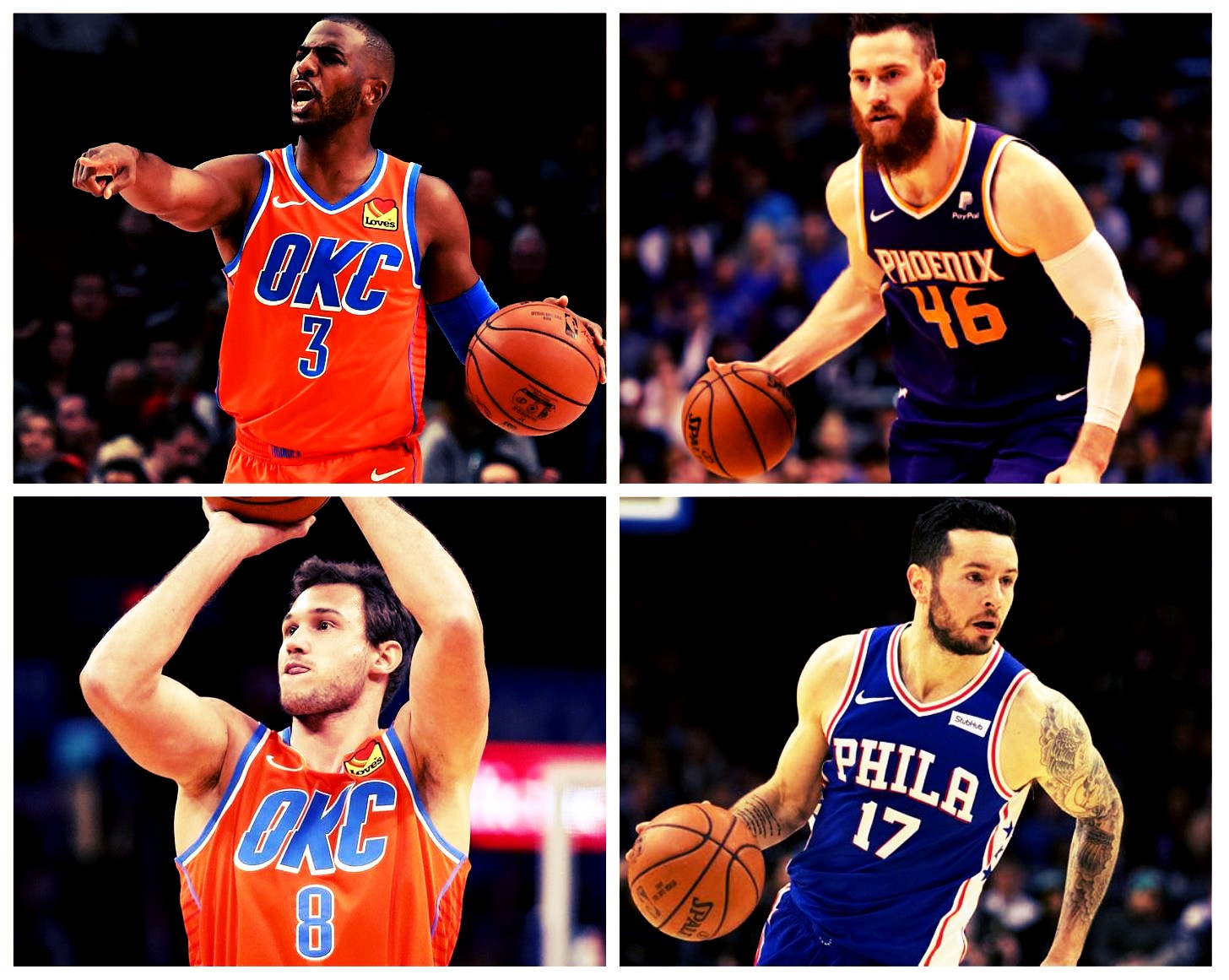 While fans would like Rob Pelinka to pull off a blockbuster trade for a big name superstar like Bradley Beal, Zach LaVine, or Victor Oladipo, there are lesser, more realistic, championship caliber moves the Lakers can make.

That doesn’t mean the Lakers won’t try to shoot for the moon and pull off a blockbuster move. We all know Lakers’ Exceptionalism is not just a slogan; it’s a mantra that drives the Lakers just like Mamba Mentality drove Kobe. When you’re defending NBA champions, making sure you hang onto key players like Kentavious Caldwell-Pope, Rajon Rondo, Markieff Morris, and Dwight Howard may be the smart route to take rather than major change.

Sometimes, it’s the little tweaks to fill critical needs that can be the difference makers in a team being able to repeat as NBA champions. After all, the Lakers had great chemistry and were not challenged in the playoffs. That’s why simply adding a third scorer, second playmaker, elite wing defender, or modern center without giving up invaluable core components could be the ideal blueprint for the Lakers to pursue this offseason.

With that in mind, here are four moves the Lakers can realistically pull off to repeat as NBA champions without sacrificing any major contributors who were instrumental to the team winning their 17th NBA championship:

The most realistic move the Lakers can make to improve their chances of repeating as NBA champions would be to trade with the Oklahoma City Thunder for 35-year old, 6′ 1,” 175 lb future HOF point guard Chris Paul.

Since CP3 will make $41.4 million next season, the Lakers will have to send out $33.1 million in salaries for the trade to be legal. For the Lakers to reach that amount, they would need Avery Bradley and JaVale McGee to opt in. That would let the Lakers trade the following six players with expiring contracts: JaVale McGee, Danny Green, Avery Bradley, Kyle Kuzma, Quinn Cook, and either a re-signed Dion Waiters or Talen Horton-Tucker.

The Lakers would have to accept the $41.4 million due Chris next season and the $44.2 million player option due him the following season, which would mean $85.6 million in salary in a pandemic ravaged NBA economy. That’s a steep price for the Lakers to pay unless Paul gives the Lakers a buyout option for the second year of his $44.2 million contract, a possibility since he does want a chance to play in LA with LeBron and win a ring.

That might be the key to the trade since it would give the Lakers a way to move on from Chris without having to pay his full salary should his play decline dramatically or should he become injured, of which he has a history. And while the Lakers would sacrifice considerable depth to make the trade, they would still field a possible starting lineup of CP3, KCP, LeBron, AD, and Howard with a bench of Rondo, Caruso, THT, Dudley, and Cousins.

A healthy CP3 would give the Lakers a third scorer, second playmaker, and elite on-ball defender to go with LeBron James and Anthony Davis and make them odds on favorites to repeat and win another championship.

One of the Los Angeles Lakers’ top priorities this offseason should be to to sign 33-year old, 6′ 10,” 260 lb Phoenix Suns free agent center Aron Baynes with their taxpayer $5.6 million MLE or non-taxpayer $9.3 million MLE.

While the Lakers succeeded playing a tandem of traditional centers JaVale McGee and Dwight Howard during the regular season, it became apparent both centers were liabilities and became almost unplayable in the playoffs. The problem on offense was JaVale and Dwight were not threats to shoot, which allowed teams to clog the paint against LeBron and AD, and on defense were too slow to defend against 3-point shooters on the perimeter.

While Baynes is not as good a shot blocker McGee or Howard are, he’s an excellent low post position defender who can protect the rim, control the boards, and has a reputation as both a savvy and capable team defender. He’s a great communicator who always makes the right rotations, defends with size and verticality, and is a rugged banger who would enable Anthony Davis to continue to play the four and roam the paint as a help shot blocker.

Where Baynes shines is on offense, where he’s a high percentage 3-point shooter who can stretch defenses and make it difficult for teams to clog the lane to prevent LeBron James and Anthony Davis from attacking the paint. Baynes only made $5.5 million with the Suns last season so the Lakers could have a great chance to sign him for the $5.6 million taxpayer MLE and offer him a starting role and a chance to win a championship ring.

A stretch five like Aron Baynes would let the Lakers play the modern version of ‘small ball’ basketball that transformed them into an offensive and defensive juggernaut in the playoffs 48 minutes per game going forward.

The Lakers would be smart to convince 32-year old, 6′ 10,” 233 lb OKC Thunder veteran power forward Danilo Gallinari to sign with them for the $9.3 million non-taxpayer MLE and a chance to win a championship ring.

While Gallo earned $22.6 million last season, he made it imminently clear winning would be a bigger motivation than money when he makes his free agent decision for this offseason, which could open the door for the Lakers. Danilo has earned over $135 million during his NBA career, which makes it easier for him to consider joining the Lakers for $9.3 million and a chance to play with LeBron and AD and win his first championship ring.

The blueprint for LeBron James’ teams winning championships has always been surrounding him with 3-point shooting, which is why a sharpshooter like Danilo Gallinari would turbocharge and transform the Lakers’ offense. Gallo’s a 38.0% career 3-point shooter who shot 40.5% from deep last season on over 7 attempts per game, which rank as the third highest 3-point percentage and most 3-point shot attempts in his 12-year NBA career.

The Lakers’ 31.6 3-point shot attempts per game ranked 23rd and their 34.9% 3-point shot percentage ranked 21st in the NBA last year. Their best 3-point shooter was KCP who averaged 38.5% on 3.4 shots per game. While Gallo‘s not a great defender, he’s always been able to produce more on offense than he allows on defense, posting an impressive 5.7 Net Rating and 3.7 Plus/Minus last season, second best on the Thunder behind Chris Paul.

Gallo starting at the four would modernize the Lakers’ offense, opening the door for Anthony Davis to finally move to the five or for Gallo to play small ball five with AD providing critical help side rim protection from the four.

If the Lakers want to upgrade their 3-point shooting, they should pursue a trade for 36-year old, 6′ 3,” 220 lb New Orleans Pelicans’ shooting guard JJ Redick, who shot 45.3% from deep last season on 6.6 attempts per game.

With New Orleans committed to rebuilding and looking to trade Jrue Holiday, it’s almost certain the Pelicans will be looking to see what they can get for the veteran Redick, one of the best 3-point shooters in the league. Unlike Holiday who had two years and $53.5 million left on his contract, JJ has only one year and $13 million left on his deal so the Lakers would have to offer the Pelicans a tempting package to motivate them to trade Redick.

While Redick may only be a one or two-year solution, his sharpshooting is exactly what the Lakers need to unleash LeBron James and Anthony Davis. His gravity beyond the arc could be a legit championship difference maker. The Lakers might be able to tempt the Pelicans to trade Redick with an offer of Talen Horton-Tucker and their 2020 first round draft pick along with the expiring contracts of Avery Bradley and JaVale McGee as salary filler.

For the win now Lakers, they would land one of the most feared 3-point shooters in the league without giving up any of the key players who were playoff contributors to winning their 17th NBA championship last season. For the rebuilding Pelicans, they would receive a promising young star in Horton-Tucker, a first round draft pick, and a pair of championship experienced veterans to help mentor their talented young roster.

A dead-eye 3-point shooter like Redick would give the Lakers a proven third scorer and 6MOY candidate who could come off the bench and rain threes on opposing defenses to unleash LeBron James and Anthony Davis.