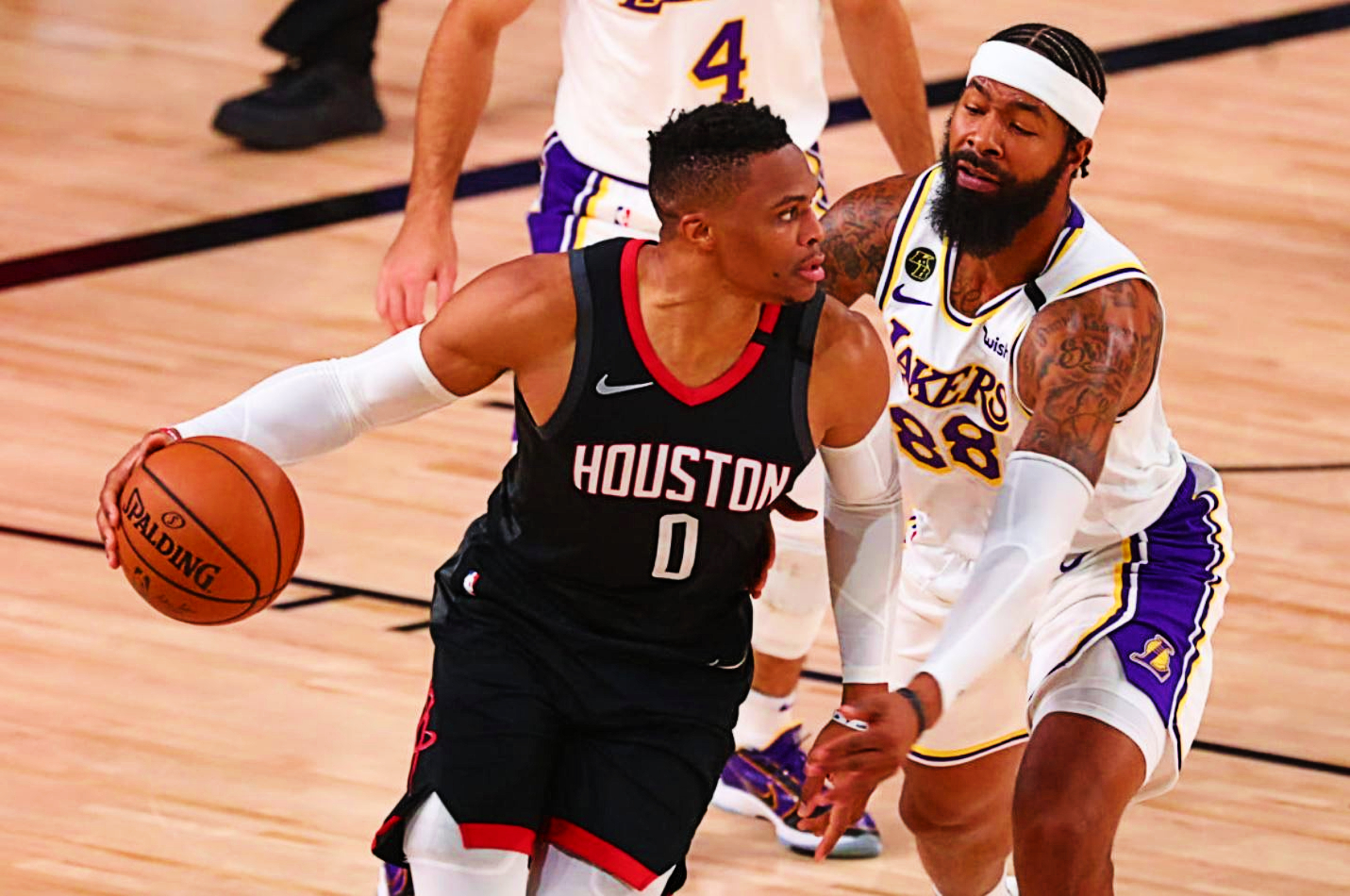 Heading into the Western Conference Finals, Frank Vogel has to decide whether to start Markieff Morris, whose small ball style transformed the Lakers in the last two wins, or revert to previous starter JaVale McGee.

For Frank Vogel, everything starts with defense. The Lakers’ core defensive strategy against the Blazers and Rockets was to identify what was the heart of the opponent’s offensive engine and then game plan to take that away. For the Blazers’ series, that meant doubling Damian Lillard and forcing other players to beat them. For the Rockets’ series, that meant doubling James Harden and betting they could handle the rest of Houston’s lineup.

While starting Morris excelled against the small ball Rockets, most analysts expect the Lakers to revert to starting McGee in the Western Conference Finals against either the Clippers or Nuggets since both start big 7′ centers. But since the two teams and centers play different styles of basketball, the Lakers will not only have to wait until Tuesday night to learn whom they’ll play but their starting lineup could be different depending on opponent.

That won’t stop Frank Vogel, or for that matter us, from reviewing both the Clippers’ and Nuggets’ lineups and game planning and strategizing how the Morris and McGee starting lineups might work against each opponent. Knowing Vogel’s calling card is defense, let’s start our by identifying what is the beating heart of the Clippers’ and Nuggets’ offensive engines and which of the Lakers’ starting lineups would be most effective in shutting it down.

1. Lakers’ Starting Lineup for Conference Finals Against the Clippers.

The heart of the Clippers’ offensive engine in my opinion is forward Kawhi Leonard’s unique ability to get to where he wants on the court, usually deep in the paint, and finish with an unstoppable high percentage jump shot. Preventing that will likely be the core of the game plan Frank Vogel deploys against the Clippers and will probably include double teaming Kawhi to force him to give up the ball and rotating aggressively as the ball moves.

With the Clippers loaded with other dangerous scorers like Paul George and Lou Williams, the Lakers should start the Markieff Morris lineup like they did against the Rockets to speed up their defensive rotations after doubling. Zubac is not a major offensive threat other than as a dunker or offensive rebounder and playing their oversized version of small ball will unleash Anthony Davis and LeBron James as shot blockers who can protect the rim.

Starting Morris should also benefit the Lakers on the offensive end as they could deploy 5-out sets and Markieff’s 3-point shooting to stretch the floor and counter Clipper attempts to pack the paint against LeBron and AD. Playing small could also force the Clippers to bench traditional center Ivica Zubac, who is a major factor for them defensively, and replace him with the smaller Montrezl Harrell, who always struggles to guard James or Davis.

Bottom line, the defensive and offensive adjustments Frank Vogel made when starting Morris for McGee against the Rockets are exactly what the Lakers need to deploy to slow down Kawhi Leonard and beat the Clippers.

2. Lakers’ Starting Lineup for Conference Finals Against the Nuggets.

The heart of the Nuggets’ offensive engine is mercurial center Nikola Jokic who’s been the driving force behind Denver’s comeback versus the Clippers and can dominate with his elite passing and inside and outside games. As great as Jamal Murray has played during Denver’s comebacks against the Jazz and Clippers, stop Jokic and you stop the Nuggets, who rely on his deft passing, crafty moves in the paint, and tendency to get hot from deep.

While Anthony Davis can defend Nikola Jokic one-on-one, the Lakers’ best option is probably to double him and get the ball out of his hands, The Nuggets are easier to defend as a team when he does not have the ball. Doubling demands the Lakers play their version of small ball with Morris starting rather than McGee to accelerate the speed and quickness of their rotations to run shooters off the 3-point line and cruise the passing lanes.

As with the Clippers, starting the Morris lineup should help the Lakers on the offensive side. If Jokic has a weakness, it’s his ability to defend in space. There is no way he’ll be able to defend Anthony Davis or Markieff Morris. The Nuggets are vulnerable to teams who play small or have stretch five centers because neither Jokic or Plumlee are comfortable defending on the perimeter, which is why they lost 5 of their last 8 games vs. Houston.

Should the Nuggets pull off a second comeback from being down 1–3, the Lakers should look to take advantage of their physical and mental state by playing their version of small ball with the Markieff Morris starting lineup.

In the end, it’s really not a surprise that the Lakers best starting lineup is the one with Anthony Davis at the five and Markieff Morris at the four. It’s the lineup that ultimately turbo-charges the Lakers at both ends of the court. The unexpected and gratifying surprise is coach Frank Vogel understanding and making the perfect strategic defensive and offensive adjustments to transform the Morris lineup into a juggernaut at both ends of the court.

The Lakers have now won two series and are just eight games away from winning the NBA championship. Whether they play the Clippers or the Nuggets, they need to start Markieff Morris and their version of small ball.