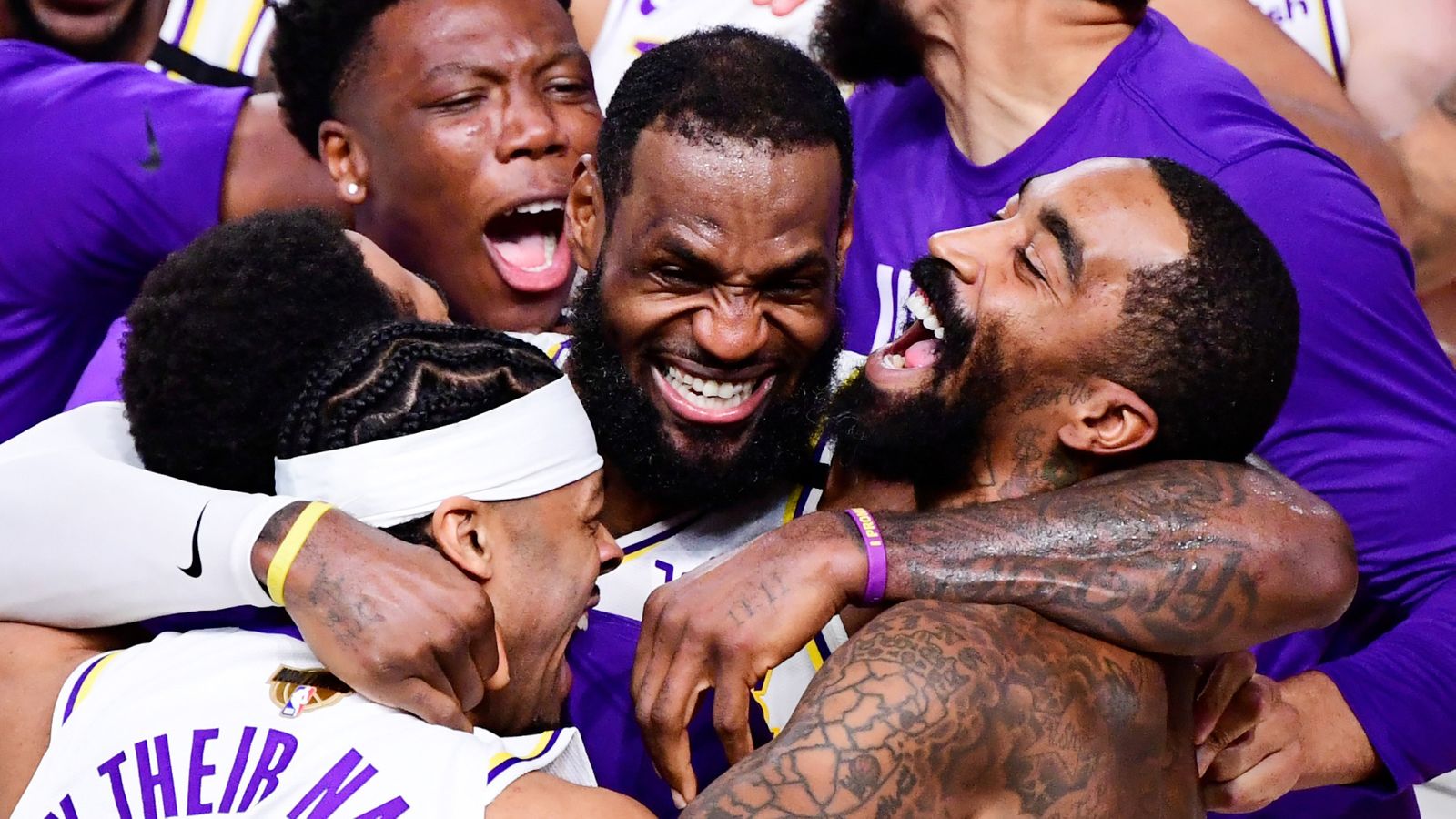 This is the second of a series of articles from each member of the Lakerholics editorial team recounting how this crazy and unprecedented year and NBA season personally impacted and affected them. Thanks to Blog Editor Sean Grice for suggesting and inspiring the series. We invite every Lakerholic to comment and let us know how this wacky year hit you and yours.

As I sit back in my chair exhaling a deep breath after the last Lakers Fast Break podcast of the NBA season, I find myself reflective of how far we’ve come. I spent the last few months listening to Rafael Barlowe’s deep insight, LakerTom’s engaging (and sometimes outlandish) rants, and Jamie Sweet and Sean Grice pointed comments on just how the Lakers pulled through to earn their 17th World Championship (Sorry Bill Simmons, it’s seventeen for the Lakers, deal with it). I’ve had on guests from the outside looking in, some who backed the Lakers and some who were very direct in predicting the team’s demise. The many Laker podcasts hosts that have come onto the program have shared their beliefs and blinding love for the team on what LeBron, AD, and the rest of the team have accomplished so far. And yes, I have had the opportunity to be an invited guest on many other programs and had to sit there and endure the opinions of others who thought mistakenly (or was it through just a blinding hatred of the Lakers or LeBron) that there would be no chance the team could find a way to thrive in this bubble format.

But as I look back on it now, a Lakers fan seemingly destined for me since my birth in Inglewood, California just a block and a half away from the Fabulous Forum, I am filled with a sense of satisfaction. That I could enjoy this moment with my girls, who weren’t old enough to remember their last title victory in 2010, is truly something I will cherish for the rest of my life. But it is also what the team has gone through in this roller coaster of a season that will have me say (as I have done repeatedly on the show) that this has been the toughest season that an NBA team has ever endured. Culminating in my definitive statement that this championship brings along with it the opinion this is the greatest title victory ever.

Oh, I know the nay-sayers will be out there seemingly forever. Miami didn’t have Bam Adebayo for two games, and Goran Dragic for virtually all of the series. The Lakers also didn’t have to match up against the Clippers, the Bucks, or the Raptors, due to those teams’ own (depending on the team) ineptitude, lack of chemistry, or underperforming at just the wrong time. Also, the team (read in -between the lines: LeBron) had months to rest heading into the bubble, and that the only extended travel was the bus trips from the arena back to their extended-stay hotel rooms.

But the Lakers 2020 World Championship needs to be thought of above all the rest the team has accomplished, due to the tremendous circumstances the team has had to endure and persevere through during the course of the last twelve months. A new superstar brought in with a blockbuster trade in Anthony Davis, left many questioning whether or not the Lakers gave up too much. The fallout of the Magic Johnson and Luke Walton departures left the team looking for a new head coach. That search finally ended up turning over to Frank Vogel, who was considered an afterthought for the position, with Jason Kidd brought on as an assistant coach seemingly destined to take over his job. Even the pursuit of Kawhi Leonard in free agency left the Lakers scrambling for talent, leaving the optimism with the Davis and LeBron pairing being high, but many questions about the talent around them being just as prevalent.

The 2019-2020 season started out innocently enough, with Anthony Davis coming into the fold and expectations for competing for a championship, all looked well for the team as they took a preseason trip to China. But with one tweet from (and now former) Houston Rockets General Manager Daryl Morey in support of Hong Kong, the Lakers and the NBA (and also the Brooklyn Nets who were traveling with the Lakers) found themselves embroiled in a controversy that turned tense, nasty, and ultimately damaging for the league as a whole losing hundreds of millions of dollars in potential revenue.

Despite the issues overseas and an opening night loss to the rival Los Angels Clippers, the Lakers got off to a great start zooming off to a 24-3 record by mid-December. Their focus on defense and challenges to one another to commit to Coach Frank Vogel’s defensive schemes proved to be an early formula for their success, their growing team chemistry, and a message to the league the Lakers would be thought of as a serious contender to the NBA title. All seemed bright for Lakers fans that the team had indeed turned things around. The positive buzz was as high as it had been in a long time for Laker Nation until the morning of January 26, 2020.

It still hits me every now and then like it was yesterday. I know where I was when I heard the news, I was driving in my car along Maryland Parkway in Las Vegas when my wife had called me from work. “I think you should check the news,” she said. “Why?” I answered. “Because Kobe Bryant was just in a helicopter crash”. “What!” I yelled. And almost immediately upon saying those words, the updates from TMZ and other news sources started leaking out the words I was extremely reluctant to see. Yes, the world had lost #24, and such a tragic event had never before impacted the NBA and its fans before such as the one that killed Kobe Bryant, his daughter Gigi and seven others. I was stunned, deeply saddened, and grieving along with millions of others. It’s something even to this day many of us have yet to recover from fully, as the loss will resonate for quite some time.

However bad this loss affected fans from all over the world who had adored Kobe Bryant, the Lakers dare I say were affected even more. Even a week of mourning and a res-scheduling of games did very little to extinguish the sadness the entire Lakers community felt. But that sense of loss and sadness eventually turned into determination, one that propelled the team going forward. Even a symbolic tribute with the donning of the “Black Mamba” jerseys that Kobe helped design and a patch with Gigi’s #2 she wore on her own team gave the Lakers an added confidence that they would be a force to reckoned with throughout the season. Alas, new challenges would soon come into play in the not too distant future, but not before the Lakers solidified themselves as a championship contender with a pair of convincing back-to-back wins over the rival Clippers and the NBA’s best record-leading Milwaukee Bucks.

The Coronavirus would become a worldwide pandemic, and bring the entire sports world (and life as we knew it) to a screeching halt. For months, we weren’t sure if we would get a continuation of the season, and in what form. Compound that with the continual issues with systemic racism in our society including the murder of George Floyd, and other African-Americans at the hands of law enforcement bringing about a worldwide movement to remind everyone that Black Lives Matter. With the world on lockdown, and racial division in America being at the forefront, it seemed like there would be some truly despondent days ahead.

But with the great desire of the NBA to bring some semblance of their game back to their fans, the decision was made to create a “bubble” after weeks of speculation at Disney’s ESPN Sports Complex in Orlando. The questions arose from coaches, players, the press, and the fans in regards to how safe would this be, and could the league really put this off? Some 100-plus days later and we have our answer and it’s a resounding yes. Months of preparation, following regulations, and confinement, and some initial bad meals did lead to a lot of hardships for everyone there, but zero positive tests out of the thousands taken during that span and the ultimate goal of the Coronavirus not ending the season was ultimately achieved.

Life inside the bubble still had its issues and complications, including a stoppage of play due to the death of Jacob Blake at the hands of law enforcement. Even the Lakers struggled with the bubble concept and were among the teams ready to pull out amidst the walkout. Cooler heads prevailed and despite a horrible performance in the eight-game bubble season, the Lakers headed into the postseason as the top seed in the west, even though many were looking to discount the team’s chances of earning the ultimate prize. I heard it, and I know you did too, all the so-called analysts, social media, and former players who favored the Clippers (see below), the Bucks, or any team facing off against the Lakers as they convincingly made their way through each and every round. Just before the playoffs began it seemed like #Fakers was trending more on Twitter than #Lakers.

Through all the adversity, both internal and external, the team pushed through under circumstances that proved to be more of a mental test than anyone would have imagined. But seeing LeBron knife his way through defenses for layups and dunks, Anthony Davis providing heroics and domination on both ends of the floor, Alex Caruso giving the team grit and hustle the team could not do without, Kantevious Caldwell-Pope chime in with (dare I say it?) “clutch” basket after basket, and yes even Rajon Rondo donning his cape and allowing his “Playoff Rondo” superhero alter ego come to life at just the right time was a sight to behold. Everyone in the rotation had their moments to shine and without the contributions of Dwight Howard, Kyle Kuzma, Danny Green, and Markieff Morris, the team may have not reached the top of the mountain so easily.

2020 has been a rough year for everyone. It’s been almost eleven months struggling with a worldwide pandemic, systemic racism, natural disasters, and an economy hit hard by all of those issues that have led to millions dealing with unexpected unemployment. But for one brief moment in time on October 11, as the Lakers grouped together in celebration on that court in Orlando with Finals MVP LeBron and AD holding the trophies, all the negative elements out there got pushed to the side, and Lakers fans like myself could rejoice in a championship ten years in the making. The Lakers earning their 17th championship is a lining for 2020 that isn’t made of silver, it’s paved with purple and gold.