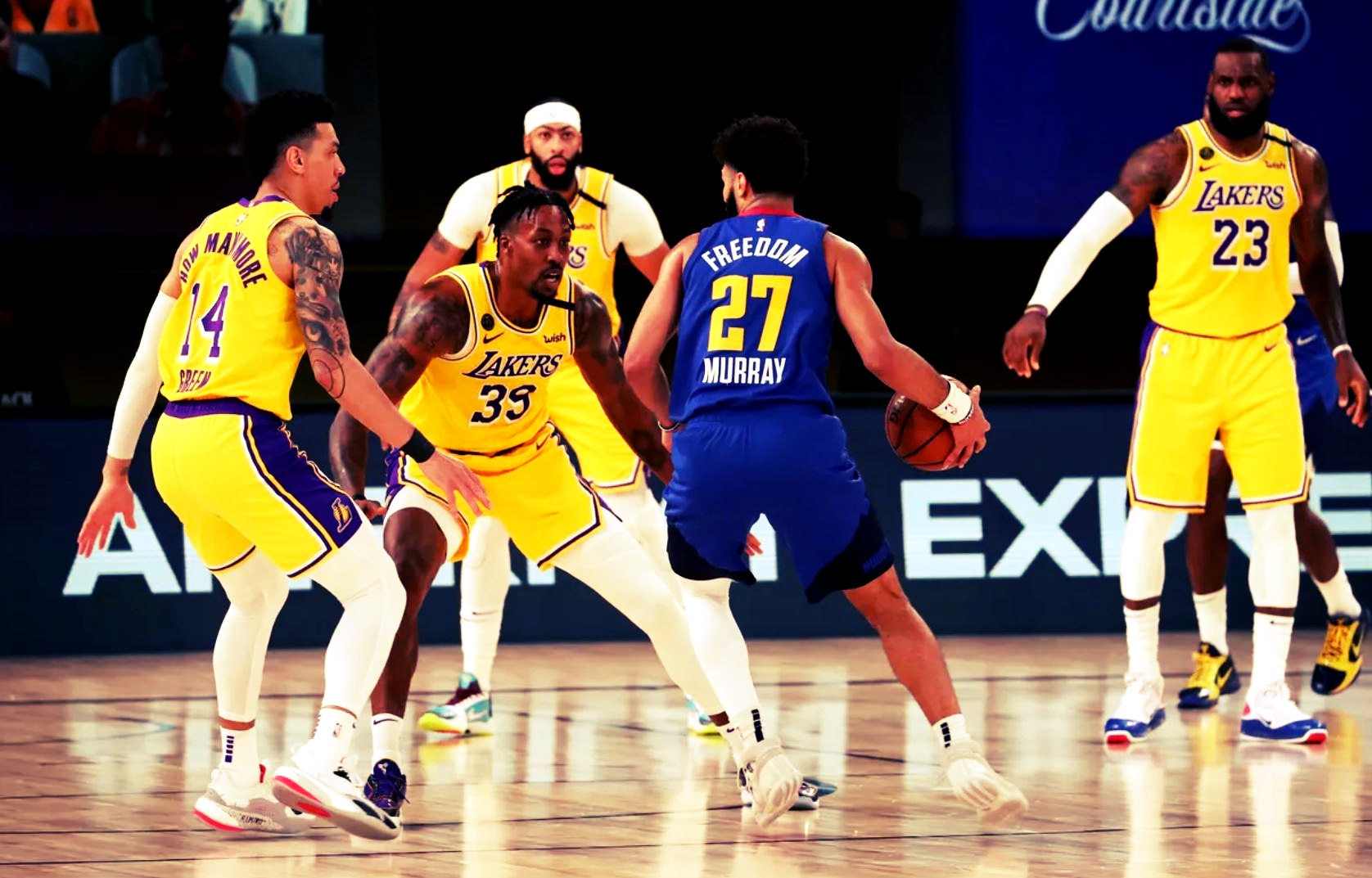 It was Playoff LeBron, Playoff AD, Playoff Rondo, and Playoff Dwight. The Lakers’ Four Playoff Superstars could have been the Four Horsemen of the Apocalypse far as the helpless and hapless Denver Nuggets were concerned.

Game 1 of the Western Conference Finals was a masterpiece of playoff basketball orchestrated by a quartet of Lakers’ superstars, including two of the greatest playmaker-big man tandems from the NBA present and past. Representing the present were the 2020 First Team All-NBA playmaker and center duo of LeBron James and Anthony Davis. Representing the past were future HOF point guard and center Rajon Rondo and Dwight Howard.

Together, the Lakers’ Four Horsemen gave the upstart Nuggets a dose of reality, breaking the game open early in the second quarter with a 17–1 run and then finishing them off with an 11–2 burst early in the third quarter. Those two runs were triggered by the Lakers’ elite defense, which totally shut down Nuggets’ superstars Nikola Jokic and Jamal Murray and held Denver to just 21 points in the second and 20 points in the third quarters.

The LeBron James and Anthony Davis starting superduo combined for 52 points, 16 rebounds, and 16 assists while the Rajon Rondo and Dwight Howard backup superduo contributed 24 points, 4 boards, and 9 dimes. With first half foul trouble and the game decided early, the Nuggets’ superstar duo of Nikola Jokic and Jamal Murray only played 25 and 29 minutes and were held to a combined 42 points, 7 rebounds, and 7 assists

The Lakers as a team recorded 33 assists compared to 23 for the Nuggets. The Playoff LeBron and Playoff Rondo playmaker tandem contributed 21 of those assists, having a hand in 74 of the 126 total points the Lakers scored. Meanwhile, the Playoff AD and Playoff Dwight center duo posted 50 points and 13 rebounds, clearly outplaying the Denver center tandem of Nikola Jokic and Mason Plumlee, who had just 30 points and 10 rebounds.

The total domination by the Lakers’ Four Horsemen is reflected in their individual plus/minus ratings. LeBron James and Anthony Davis both posted +15 ratings while Rajon Rondo and Dwight Howard recorded +13 and +14. Since they led by as many as 27 points late in the third quarter, the Lakers were able to rest their stars in the fourth quarter. James only played 31 minutes, Davis only 33 , Rondo only 22 , and Howard only 16 minutes.

Game winning play like the Lakers showcased in the second and third quarters to put Game 1 away demand contributions from more than the superstars and the Lakers got great performances from their role players. Caldwell-Pope chipped in 18 points on 6–10 shooting and 3–5 threes, Kuzma added 11 points on 5–8 shooting and 1–2 threes, Morris 9 points on 3–4 from deep and elite defense, and Green 8 points and stellar defense.

While it’s just one game and the never-say-die Nuggets have proven their resilience by coming back twice in these playoffs from 1–3 deficits, these Lakers are clearly not the overachieving Thunder or choke prone Clippers. The Lakers are not only hitting on all cylinders and peaking at the right time, they’re also led by four sure-fire future HOF players who are on a quest seeking a championship and redemption in the eyes of their critics.

LeBron James is ‘pissed’ he only received 16 of 101 votes for the 2020 MVP award given yesterday to Giannis Antetokounmpo. Anthony Davis is out to prove that he and not Antetokounmpo deserved the 2020 DPOY Award. Rajon Rondo has a chip on his shoulder and wants to prove Playoff Rondo still lives. And Dwight Howard wants to erase three DNP’s and the bad taste of being a dysfunctional teammate and win his first NBA championship.

The Lakers have their sight clearly focused on winning the franchise’s 17th NBA championship and are now just 7 games away from reaching that goal and proving to the haters and doubters they’re the best team in world. They’re not going to take their foot off the gas or the throats of the Denver Nuggets. With the Milwaukee Bucks and the Los Angeles Clippers no longer in the way, the Lakers can see the finish line and sense the championship.

Head coach Frank Vogel and his coaching staff have done a masterful job managing their roster, rotations, and game plans. Now the Lakers’ Four Horsemen can smell the barn and clearly see the championship finish line.

9 Games down and 7 to go to win their 17th championship and redemption.