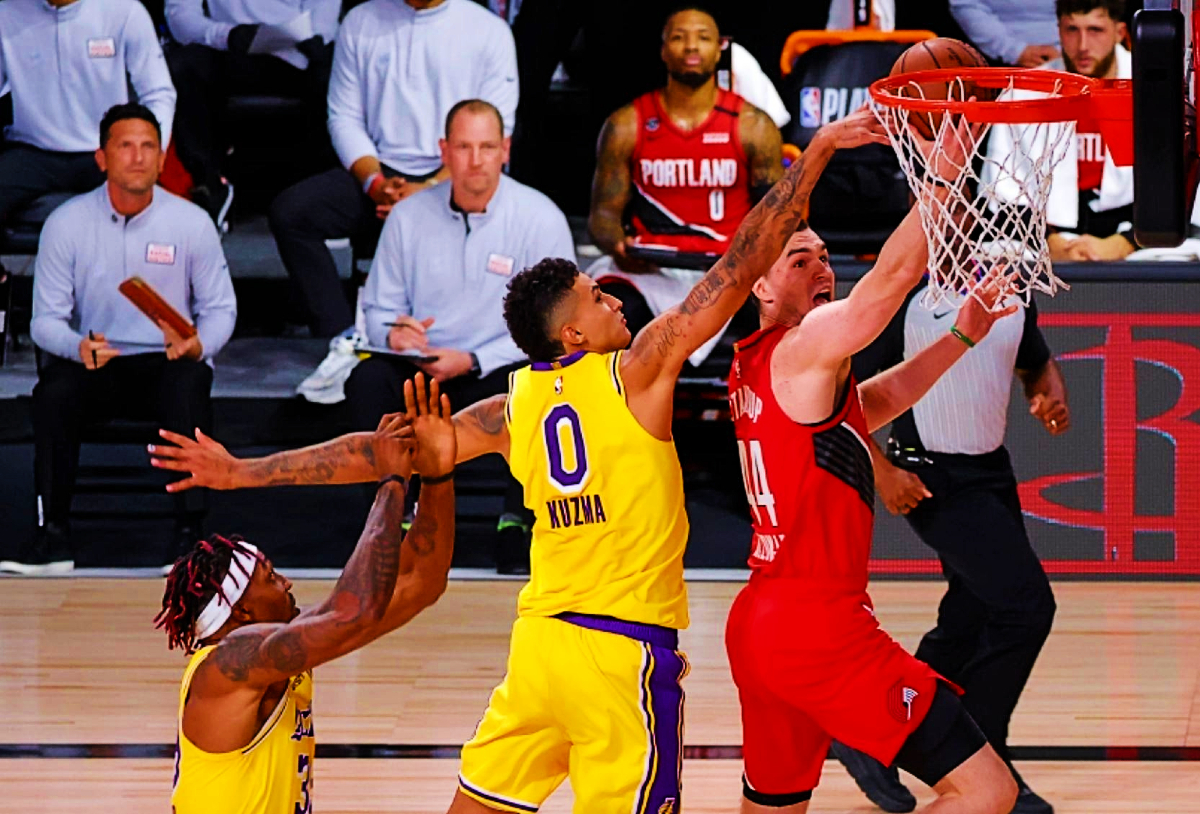 Finding a spot in the Lakers’ starting lineup for Kyle Kuzma has always been a tough challenge since he plays the same small forward and power forward positions the team’s two superstars LeBron James and Anthony Davis play.

The problem is Kyle Kuzma would be a starter on almost every other team in the NBA other than the Lakers and deserves to be paid accordingly, which is why the discussions about his future have all focused on trades. The hard reality in today’s salary capped NBA is there is no way the Lakers are going to pay a starter level salary for a player to come off the bench to backup max-contract superstars LeBron James and Anthony Davis.

What makes the situation even more frustrating is Kuzma has revamped his game to become a true starter-level player. He’s fixed his broken shot and dramatically improved his defense, playmaking, and decision making. Critics used to write off Kuz as another one-dimensional scorer on a losing team and question whether he could hold up as starter on a championship team. It’s a small sample size so far but Kuz has been changing minds.

The challenge for the Lakers right now is to figure out how to fit Kyle Kuzma into the starting lineup now that he’s shown he has the maturity and skill sets to play with and complement both LeBron James and Anthony Davis. LeBron has said the Lakers will need Kuzma to be their third star in the playoffs to win the championship and Vogel has promised he will play ‘big’ minutes in the playoffs but so far he’s only averaged 24.7 minutes per game.

The truth is it’s impossible for Kyle Kuzma to get starter level minutes off the bench on the Lakers because he’s not a one-dimensional player like Lou Williams or Jamal Crawford whose primary focus is just making buckets. Frank Vogel needs to make some hard decisions as the playoffs progress because Kuzma needs to start or at the least get more rather than fewer minutes in the playoffs if the Lakers are going to win the championship.

The logical solution is for the Lakers to move Anthony Davis to the five to replace JaVale McGee and start Kyle Kuzma at the four, which Vogel has been reluctant to do because of Davis’ stated preference to play the four. Kuzma’s recent excellent defense against elite scoring guards like James Harden, Jamal Murray, and Damian Lillard, however, may have created another opportunity to work his way into the Lakers’ starting lineup.

In today’s positionless NBA , the position a player can defend has become the position he can play and Kuzma’s improving ability to defend twos could possibly open a door for him to become the Lakers’ future shooting guard. Playing the two, the 6′ 8″ Kuzma could easily evolve into the third star the Lakers need to play alongside James and Davis. He’d be a tantalizing vision for the Lakers to embrace and matchup nightmare for opponents to fear.

Danny Green’s decline and subpar play has not only opened a door for Kyle Kuzma to start or take over major minutes at shooting guard in the playoffs but also raised speculation Kuz could become the Lakers’ future at the two. The looming presence of the small ball crazy Houston Rockets as the Lakers’ likely next playoff opponent should be the perfect opportunity for coach Frank Vogel to start Kuzma or at least let him play true starter minutes

It’s time for Lakers’ head coach Frank Vogel to end his stubborn reluctance to making changes in his starting lineup and embrace the opportunities coming up to give Kyle Kuzma a chance to show what he can do as a starter.