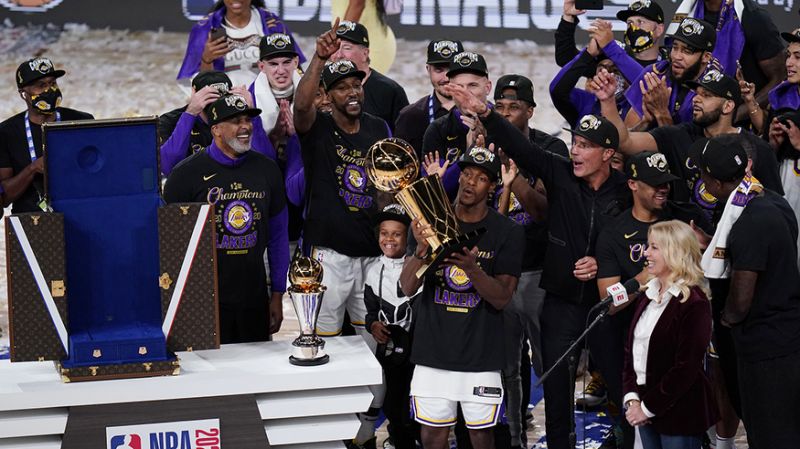 “Lakers #1” is something a good buddy of mine say to one another whenever the Lakers do well. In recent years that phrase had fallen off quite a bit. We made it a point to got to STAPLES at some point every year, this year we were unable to make that journey as we had loose plans to catch a game near the end of the regular season. Obviously planetary events altered those plans. So, for my friend, for the Laker fans around the globe, and for all of us Lakerholics here I’d like to say it again: LAKERS #1!

Honestly, I could go on. Bonus point has to go to one Jeannie Buss who just became the first female owner to win a championship…in any sport. There aren’t many female owners (true owners, I’m not talking they have a tiny share, this is Jeannie’s team and she’s made sure everyone knows) and Jeannie has long been the best of the bunch. From taking the reigns after her father’s passing, to moving the team through the twilight of Kobe’s career into the Kobe-less years, ousting Jim and Mitch, not letting Magic’s departure derail anything at all, trusting Rob “could have gotten a thing point too” Pelinka to helping the NBA as an entity as much as she does her franchise Jeannie is an excellent example of what a modern owner should embrace to be successful on and off the court. I know the Lakers have ended huddles with 1-2-3 MAMBA!!! and that is apropos, but in a lot of ways this one was also for Jeannie Buss who, at long last, did her Dad proud to the fullest degree. Congratulations, Jeannie.

Well, that’s it. That’s all I got for today. Couldn’t write this last night, had to watch the game again. It was that fun. I’m in a slight state of disbelief but it is indeed true. I checked ESPN, we’re the champions, again. It feels fitting, as well. To you Lakerholics, old, new, and even those who have moved on I say thank you. Thank you for your time, passion and fandom. The last few years haven’t been easy, nothing is guaranteed and to stay on board the Laker ship during it’s tumultuous voyage to this point hasn’t always been easy. But our faith has been rewarded. Banner #17 will one day hang at STAPLES, there will be some sort of parade at some point, and best of all we’ll begin our defense of this moment sometime next year, hopefully with some if getting to attend those games in STAPLES. So to all of you I say “enjoy this!” because these moments, like a ll good things, are fleeting. Don’t take rings for granted for they are earned not bestowed. Tip of the cap to Jimmy Butler, the Miami Heat team and all the folks who are a part of the most excellent organization. If any team was destined to match up against the Lakers this season there are a lot of reasons the Miami Heat were the most apropos. James played there, Riles came from here, Vogel never beat them and so on and so forth. They say it takes a lot of heat to correctly forge steel. That statement has never rung truer.

PS: One last tidbit, after this week I’ll be doing a fiver on every current Laker to assess their performance over the course of the season, where they stand in terms of our future and how the team might look when next it’s assembled to defend the title so keep on popping by. Thanks to LakerTom for hosting us all on his awesome site, to magicman for all the fine mojo he brings and again to all you Lakerholics who help fuel the discussion and keep the passion burning. Have a good one and if we don’t see during the off-season, however long that will be, we’ll see you next time.